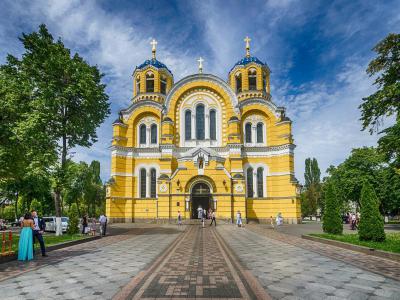 Saint Volodymyr’s Cathedral is a complex architectonic monument and important religious site in Kiev. Recognized as the “mother church” by adepts of the Ukrainian Orthodox Church, St. Volodymyr’s (aka St. Vladimir’s) Cathedral is one of the two most important cathedrals in the city.

The imposing building commemorates 900 years of Christianity in Ukraine. The cathedral's plan, featuring 13 cupolas, was first laid out on paper in 1852. However, due to lack of funds, the architects were confined to just seven cupolas, yet afforded a considerably larger space. Designed in Byzantine style, the cathedral was finished in 1859. Painting of the interior and finishing works took another 37 years. The cathedral was finally opened to the public in 1882 and in 1896 was presented to the Russian Emperor, Nicolas II, and his wife.

Saint Volodymyr’s is an impressive architectural site, topped with seven cupolas of which the tallest one rises to 49 metres. The interior is rich with numerous mosaics, beautifully crafted by Venetian artists. The frescoes were made by prominent Russian painters: V. Kotarbinsky, M. Pymonenko, M. Vrubel, S. Kostenko, V. Vasnetsov and V. Zamyraylo, who used the opportunity to reveal their talent in full splendour on the walls of the cathedral under the guidance of Professor A. Prakhov. The "Holy Mother of God", painted on the alter apse by V. Vasnetsov, is rightfully considered as the world's masterpiece.
Image by Dezidor on Wikimedia under Creative Commons License.