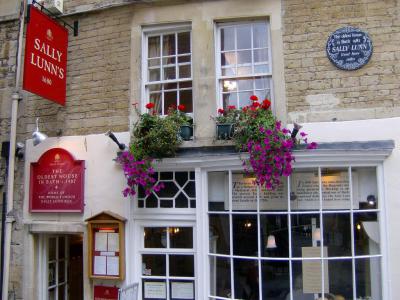 Inside one of the oldest houses in Bath, you will find some delectable treats. As the story goes, Sally Lunn was a French immigrant who arrived in Bath in 1680 and established this bakery. The house was built around 1482, but the masonry oven and other elements on the ground floor date from around 1137.

The lower level of the home hosts a museum where you can tour the original kitchen. The house still serves food based on their trademark recipe, the "Sally Lunn Bunn." In the evening, they serve fine English food, including some spectacular pies.

But all is not as it seems at Sally Lunn's Historic Eating House. While the food is excellent, and the house is very old indeed, there is little historical evidence of one Sally Lunn, or Solange Lyon, as the story goes. The building was purchased in the 1930s by the enterprising Marie Byng-Johnson, who opened a tearoom and claimed to subsequently discover an "ancient document" that told Madamoiselle Lunn's story. The "Sally Lunn Bunn" moniker had already long been used to describe the sweet teacake throughout Britain.

Regardless of the details, Sally Lunn Bunns are an iconic Bath original. There's no better place in town to take tea, and there's no better accompaniment than the original teacake. Savory or sweet, with tea or coffee, you can't go wrong. Just don't forget the clotted cream.
Image by Fahdshariff under Creative Commons License.