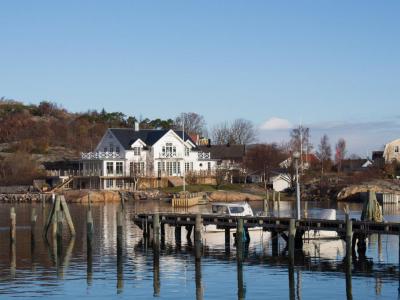 Saltholmen is a peninsula on the southern shore of Älvsborgsfjorden in the district of Älvsborg in Gothenburg. It was originally an island, but during the construction of the Gothenburg tram network a connection was made to the mainland. The connection has since been widened to accommodate car parking, making Saltholmen effectively a peninsula.

The company Aktiebolag Långedrag was founded in 1903, which was supposed to renovate the area from Långedrag to Saltholmen, including constructing a swimming area on Saltholmen. The tram network was extended to Saltholmen from 1906 to 1908. The original plans were not realised, but from 1906 to 1908 a warm bathing area, a cold bathing area and a restaurant were built. The latter was later replaced by a café in 1915, which is still in use. Saltholmen's parking area is located near the cold bathing area and the café. There is a transformer tower on the top next to the warm bathing area. In 1923 a swimming stadium was built on Saltholmen. The swimming pool was 50 x 25 metres with eight tracks, two springboards and a trampoline. The auditorium seated 970 persons.

The warm bathing area represents Art Nouveau architecture and has a tight bath, a Finnish-style sauna, pools and bridges. The area was closed down in 1982 and later converted into an office. There are premises of the Gothenburg canoe association on Saltholmen.
Image Courtesy of Flickr and Lemsipmatt.
Sight description based on Wikipedia.

Gothenburg is Sweden’s second-largest city. Its river-side location has been vital in its development from a trading colony to a modern, vibrant city. Today, Gothenburg is known for its culture, fabulous cuisine, and international flair.

Gothenburg was founded in 1621 by King Gustavus Adolphus. The king gave generous tax cuts to Dutch allies and encouraged German and Scottish residents to...  view more

Like the majority of Swedish cities, Gothenburg is constantly re-inventing itself whilst continuing to celebrate its past. The latter is no more evident than in the city’s stunning historic architecture, manifested in a wonderful collection of stately old buildings, carefully preserved amid the relatively new ones.

Gothenburg’s architecture comes in a wide range of styles, from Gothic to...  view more