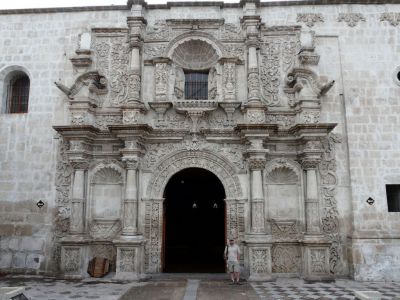 Located on a street bearing the same name, Iglesia de San Agustín is an impressive Baroque-style church built in 1575. Like many other Arequipa buildings, San Augustin Church suffered a lot of damage during the strong earthquake of 1868, but it underwent a series of restorations in the 19th century. During the restoration some Neoclassical ornamentation was added to the interior and the facade. Inside, notice the careful attention to decorative detail reflected in the rich ornate dome, the impressive high altar and fine golden carvings. There are also several large paintings in the central area of the church depicting religious life in the city during the colonial era.
Image by RapFever on Wikimedia under Creative Commons License.

This sight is featured in a self-guided walking tour of Arequipa, Peru within the mobile app "GPSmyCity: Walks in 1K+ Cities" which can be downloaded from iTunes App Store or Google Play. Please download the app to your mobile phone or tablet for travel directions for visiting this sight. The app turns your mobile device to a personal tour guide and it works offline, so no data plan is needed when traveling abroad.

Arequipa is a vibrant city with streets full of life. The city's rich colonial past and colorful traditions make for a fun, exciting visit. The following walking tour will take you to Arequipa’s most popular local spots.