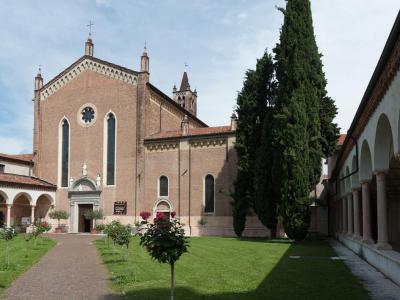 San Bernardino is a church in Verona, northern Italy. The church, in Gothic style, was built from 1451 to 1466. The church has a nave and a single aisle. The simple façade is in brickwork, with a Renaissance portal decorated by three saints figures. Notable is the collection of Veronese 16th century paintings in the six chapels of the aisle. The first is that of St. Francis or of the Terziari, with frescoes by Nicolò Giolfino (1522) with the stories of St. John the Evangelist and St. Francis. The fourth chapel, dedicated to St. Antony, has frescoes by Domenico Morone (1511), in poor state. The fifth, includes a Cruficixion by Francesco Morone (1548). The sixth chapel was designed by Michele Sammicheli: its altarpiece, from 1579 (Madonna col Bambino and St. Anne) is by Bernardino India, while the lunette has an Eternal Father by Pasquale Ottino. Frescoes by Domenico Morone and his son Francis can be found also in a hall of the annexed convent.
Image by Haneburger on Wikimedia under Creative Commons License.
Sight description based on wikipedia