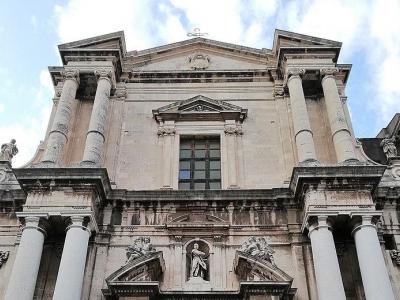 San Francesco Borgia is a Roman Catholic church adjacent to the former Collegio Gesuita, and standing parallel to the church of San Benedetto. The building is now mainly used for exhibits, and still holds much of the original Jesuit artwork. The church is presently deconsecrated and used for cultural activities by the Soprintendenza Regionale ai Beni Culturali.

The facade has a more classical front, with five statues of Jesuit saints. The one in the center, over the portal is the titular saint, while the flanking lower two are Ignatius Loyola and Francis Xavier. The upper statues depict Aloysius Gonzaga and Stanislaus Kostka.

The interior layout of the church is of a Latin cross, with a central nave and two aisles with chapels. Most of the interior was completed by 1740. The first altar on the right has an altarpiece depicting the Vision of Madonna and Child to San Giovanni Francesco Regis while in agony by Luciano Foti (1694-1779). The second altar on the right depicts the Saints Stanislaus Kostka and Aloysius Gonzaga by Giovanni Tuccari (1667-1743). The main altar is rich in polychrome marble and sculptural decorations by Giovanni Battista Marino. Part of it was vandalized in the 1980s. The main altarpiece is a copy (1567) of the Madonna della Neve, found in Santa Maria Maggiore, Rome. The work was donated by Francesco Borgia himself.

At the base of the dome there are statues of four evangelists. The frescoes depict the Triumph of St Ignatius and the Jesuits over heresy with a glory of Saints and Martyrs. The apse has painted curtains in a trompe-l'œil effect.

In the altars on the left there are two altarpieces, featuring St Agatha visited in jail and a Glory of St Joseph.
Image Courtesy of Wikimedia and Effems.
Sight description based on Wikipedia.