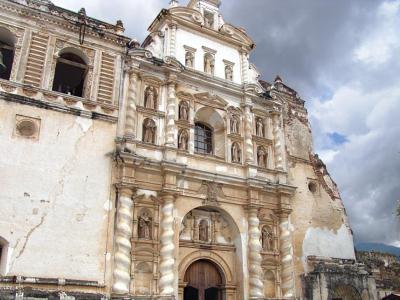 San Francsico Cathedral is a church in Antigua and one of the most frequented sanctuaries by the local population because of the shrine of Peter of Saint Joseph Betancur.

This chapel was severely damaged in 1565 and during the next ten years donations were collected to build a new sanctuary located two blocks away in 1579. The chapel and cloister were expanded during the 17th century. In 1684 the structure was reinforced and withstood the earthquake of 1691.

The church itself was built by Diego de Porres and inaugurated in 1702. Its facade, with twisted salomonic columns, is typical of the Spanish-American baroque and is similar to that of Antigua Guatemala Cathedral. It has sixteen vaulted niches, each but the lowest two containing a saint or a friar. These include the Virgin Mary, San Diego de Alcalá, San Antonio de Padua, San Juan Capistrano, Santa Clara, Santiago, and Santa Isabel from Hungary.

At the entrance of the monastery there are some murals, in which there can be seen the images of some Franciscans friars with a skeleton. Its bell and clock towers from the 17th and 19th centuries remain in ruins.
Image Courtesy of Wikimedia and ZackClark.
Sight description based on Wikipedia.