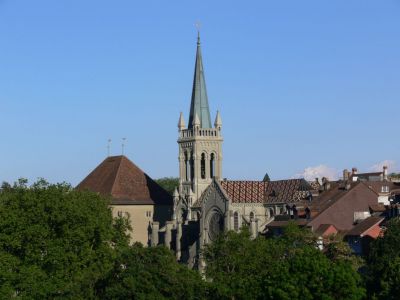 During the Protestant Reformation in the early 16th century, the city of Bern adopted the new Protestant faith and the city's churches converted, leaving the remaining Catholics in Bern without a church. Over the following centuries, they remained without a church in the city. Following the French invasion of Switzerland in 1798 and the political reforms of the Helvetic Republic, the catholic community of Bern held mass in the choir of the Bern Minster until 1803. Beginning in 1804 they moved to the French Church.

The Church of St. Peter and Paul was begun in 1858 as the first Catholic church built in Bern since the Reformation. It was built next to the Town Hall of Bern, on the site of the St. Johannsen granary (which had been built over the ruins of a mint which burnt to the ground in 1787). The church was built in the style of the Romanesque and French cathedral Gothic. Construction began in 1858 and was completed in 1864. The first mass was celebrated in the church on 13 November 1864.

Church of St. Peter and Paul is designated as a Cultural Property of National Significance.
Image Courtesy of Wikimedia and Andreas Praefcke.
Sight description based on Wikipedia.