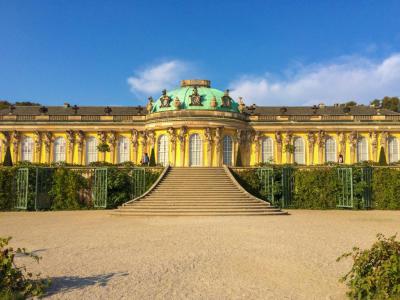 Sanssouci Palace was built by Frederick the Great between 1745 and 1747 and served as his summer palace. The palace’s name means “without concern,” alluding to its function as a restful retreat.

Frederick the Great wanted to cultivate grapes, figs, and plums and designed a terrace and gardens. The restful palace was Frederick the Great’s favorite residence. The palace has a grand facade but originally had just ten main rooms located on a single level.

Sanssouci Palace features Rococo style with ornate reliefs and elaborate tapestries. The style is so unique that it is known as Frederician Rococo.

The interior features beautiful architecture. The Concert Room hosted the king’s flute concerts. The Fourth Guest Room is thought to be the room that renowned philosopher Voltaire stayed in when visiting Sanssouci. The Library has cedar paneling and houses about 2000 books. During Frederick’s reign, the books were all in French, as French was thought to be more elite than German.

Frederick the Great’s tomb is located on the palace’s highest terrace. He was buried next to his beloved dogs in his favorite place on earth.

Frederick William IV enlarged the palace during the 19th century. The palace now operates as a museum and is part of the UNESCO World Heritage Site. The palace is located in Sanssouci Park, which features several buildings, including the New Palace, Chinese House, Dragon House, Roman Baths, and the Church of Peace.

In the summer, the palace hosts Potsdam Palace Nights. The gardens are lit up, and guests are treated to classical music. Actors dress in period costumes and mingle with guests. The palace also hosts dance and theater performances as well as lectures. On the weekends, the night ends with midnight fireworks.
Image Courtesy of Wikimedia and ernstol.