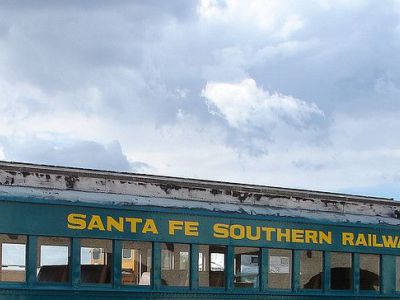 Santa Fe Southern Railway (reporting mark SFS) is a short line railroad. It carries both passengers and freight between Lamy and Santa Fe, a distance of 18.1 miles (29.1 km). It is a tourist railroad that also carries freight: the passenger cars are vintage and most passengers are tourists.

It began operations in 1992, after the Atchison, Topeka and Santa Fe Railway ended operations on the line and a group of local businesspeople purchased the line, initially operating freight service, but subsequently adding passenger trains. Currently, the railroad operates mixed trains, hauling freight, which consists largely of building supplies, and passengers, which run at least twice a week, depending on the season. It also operates occasional charter and special trains.

On 20 May 2011, the railroad was evicted from its headquarters at the depot in Santa Fe to make way for a new visitors center planned to serve New Mexico Rail Runner passengers.

The railroad operates several coaches formerly owned by the Central Railroad of New Jersey, as well as a dome car, a flatcar, and a caboose. Motive power consists of two EMD GP7s, one rebuilt to GP16 specifications.