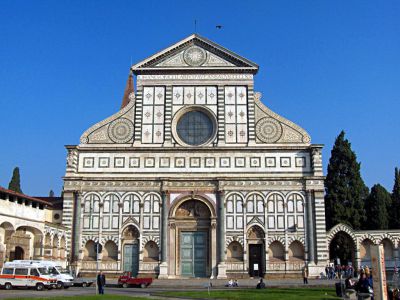 Built in the 13th century, Santa Maria Novella is, chronologically, the first great basilica in Florence, and the city's principal Dominican church. The church, the adjoining cloister, and chapter house contain a multiplicity of art treasures and funerary monuments. Especially famous are frescoes by masters of Gothic and early Renaissance, financed by the most important Florentine families, who ensured themselves funerary chapels on consecrated ground.

On the exterior, the pediment and the frieze are clearly inspired by antiquity, but the S-curved scrolls in the upper part are new and without precedent in antiquity. Solving a longstanding architectural problem of how to transfer from wide to narrow storeys, the scrolls (or variations of them), found in churches all over Italy, all draw their origins from the design of this church.

As well as being a beautiful church with amazing cloisters, it also contains many art treasures: frescoes, statues, paintings and wooden crosses. Some of the pieces are world-famous, such as "The Holy Trinity", a fresco by Masaccio which profoundly influenced Florentine painting and inspired future generations with its use of perspective and mathematical proportions. Also of note is the pulpit designed by Brunelleschi himself, which has a particular historical significance since it was from this pulpit that the first verbal attack was made on Galileo Galilei, leading eventually to his indictment.

***DANTE'S FLORENCE TOUR***
Don't miss the Cappella Strozzi di Mantova situated at the end of the left transept. The frescoes are inspired by Dante's "Divine Comedy": Last Judgment (on the back wall; including a portrait of Dante), Hell (on the right wall) and Paradise (on the left wall). This artwork was made between 1350 and 1357.