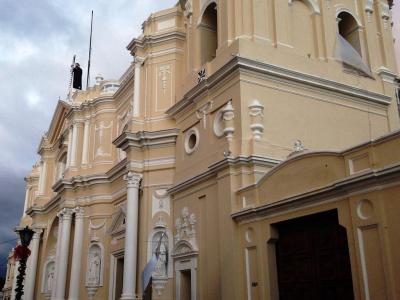 Santo Domingo Church is a magnificent Catholic Church, famous for its grandiose celebrations of the image of Virgen del Rosario, also known as Nuestra Señora del Rosario, the religious character crowned queen of Guatemala in 1933. Construction of the church began in 1782 and was completed in 1807. The elegant façade of the building received its new colour in 1917, when extensive restoration works were carried out, and when the carved stone statues were placed. Santo Domingo’s richly decorated façade suggests Baroque design, yet the gracious lines of the structure and classical elements such as Ionic columns reflect Neo-classical architectural style.
Image by andycoan on Flickr under Creative Commons License.

Guatemala City is a popular tourist destination as this charming historic city offers a great number of attractions to visit. The southern side of the city is well endowed with national museums, where visitors can enjoy intriguing exhibitions of natural history, modern art and archaeological findings. Discover the world of fauna at Aurora Zoo and find some real treasures in the Handicrafts Market....  view more