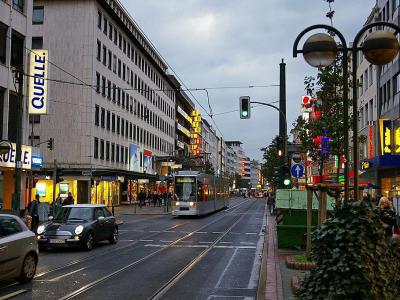 Schadowstraße is a shopping street in Düsseldorf, Germany, located in the districts of Stadtmitte and Pempelfort. The street cuts through downtown Düsseldorf, starting at Königsallee, passing the Tausendfüßler and reaching up to Berliner Allee. Schadowstraße is named after the German Romantic painter Wilhelm von Schadow. The Western section towards Königsallee is a pedestrian zone and has some landmark buildings, such as the Schadow Arkaden, a shopping mall designed by German architect Walter Brune in 1994, and the Peek & Cloppenburg flagship store, designed by American architect Richard Meier in 2001. It is one of the most frequented shopping streets in Düsseldorf.
Image by Johann H. Addicks on Wikimedia under Creative Commons License.
Sight description based on wikipedia