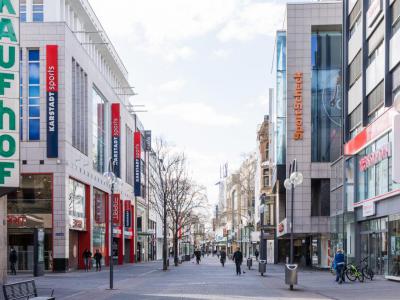 A trip to Cologne is incomplete without a visit to the famous Schildergasse shopping boulevard. The street dates back to Roman times, where it was the city's Decumanus Maximus. During the Middle Ages it was home to artists who painted coats of arms where the street got its name from (Schild meaning Shield). With 13,000 people passing through every hour, it is the busiest shopping street in Europe. The Schildergasse is a designated pedestrian zone and spans about 500 meters from Hohe Straße on the Eastern end to Neumarkt on the Western end. People visiting Cologne definitely include a trip to Schildergasse in their itinerary.

At Schildergasse, you can find reputed chain stores and brands apart from individual retailers. Some of the popular landmarks on Schildergasse include the Renzo Piano-designed Peek and Cloppenburg’s Weltstadthaus and the ancient Protestant Church of St. Antoniter. Another popular shopping mall is Hohe Straße. Some of the popular tourist areas of interest close to Schildergasse include the Schnutgen Museum, Kathe Kollwitz Museum, Church of St. Cacilien Basilica and Rautenstrauch Joest Museum. On your trip to Cologne, walk through this exciting shopping street. You will find so many interesting things here making it hard for you to hold on to your wallet.

Why You Should Visit:
One of the most popular shopping streets in Europe, with seemingly endless possibilities to eat and drink, plus all the famous German, European and US brands.
Image by Raimond Spekking on Wikimedia under Creative Commons License.
Sight description based on wikipedia

Want to visit this sight? Check out these Self-Guided Walking Tours in Cologne. Alternatively, you can download the mobile app "GPSmyCity: Walks in 1K+ Cities" from iTunes App Store or Google Play. The app turns your mobile device to a personal tour guide and it works offline, so no data plan is needed when traveling abroad.

Cologne is one of the most popular shopping destinations in Germany. People make special trips to the cathedral city just to stroll and shop to their heart's content. The most popular shopping streets are Schildergasse and High Street. There are also shopping centers like Neumarkt Galerie and Global City Building that are well worth checking out. Follow this self-guided shopping tour to...  view more