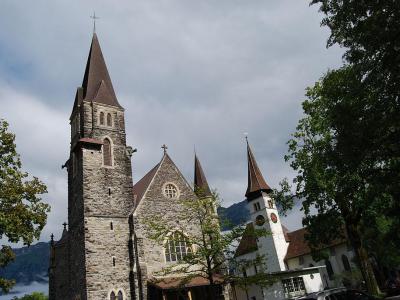 Schlosskirche, sometimes called Reformierte Schlosskirche or "the reformed church," is one of the oldest building in Interlaken. Originally an Augustinian monastery, the castle church was built in 1133. Today, Schlosskirche is used as a convent and is one of the city's most visited places.

It wasn't until the 19th century that Schlosskirke was used as a church again. The church was restored with the aid of architect Adolf Muhlemann and re-dedicated in 1911.

Visitors to Interlaken can tour Schlosskirche to see the beautiful stained glass windows, the private garden and the medieval clock, which tolls on the hour. Church services are held every Sunday at 10 AM.
Image Courtesy of Wikimedia and Dietrich Michael Weidmann.

Want to visit this sight? Check out these Self-Guided Walking Tours in Interlaken. Alternatively, you can download the mobile app "GPSmyCity: Walks in 1K+ Cities" from iTunes App Store or Google Play. The app turns your mobile device to a personal tour guide and it works offline, so no data plan is needed when traveling abroad.

The city was originally called Aarmuhle due to its location on the Aare River. The name was changed to Interlaken in 1891. Even before the name change, the area was popular with tourists. At the...  view more