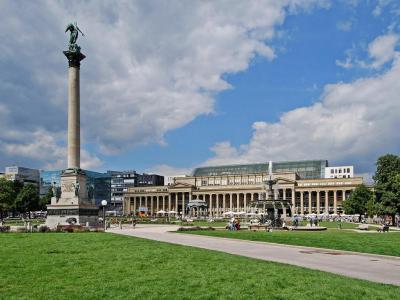 Schlossplatz is the largest square in the centre of the city of Stuttgart and home to the New Castle which was built between 1746 and 1807. The entire square was last fully renovated in 1977 to mark the staging of the Bundesgartenschau (State Garden Show) in Stuttgart. The lawns and flowerbeds were renewed in 2006 following the staging of the 2006 World Cup Finals.

Every year Schlossplatz is home to major outdoor events such as open air concerts, children's fairs and parts of the Christmas market including an outdoor ice rink. During the 2006 World Cup Finals the square regularly held more than 40,000 spectators who watched live matches on 3 huge screens.

Schlossplatz featured the United Buddy Bears exhibition in summer 2008 - an array of 144 two metre-high sculptures, each designed by a different artist, touring the world as a symbol of cultural understanding, tolerance and mutual trust.
Image by Enslin on Wikimedia under Creative Commons License.
Sight description based on wikipedia