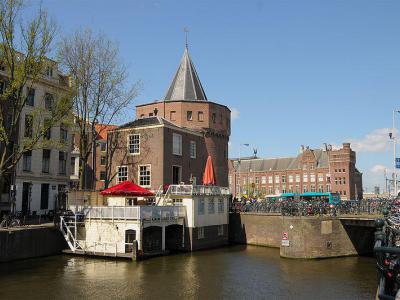 The Schreierstoren, literally translating to "sharp angles”, was once part of the medieval wall built around the city of Amsterdam. The structure was named so because of the sharp angles it made with the Geldersekade and the Oudezijds Kolk. Constructed with the sole purpose of protecting the city in the 15th century, the Schreierstoren stood as a tower of defense.

Throughout its history, the Schreierstoren has been associated with many tales and myths. According to a popular belief, it is nicknamed the “Weeping Tower” because the wives of sailors and travelers reportedly said their goodbyes and anxiously waited for their husbands' return here. A gable stone with an etched picture of a crying lady is some proof to this legend.

Although the story of the weeping wives does sound plausible, the etched picture is hugely misunderstood. The woman depicted on the stone is actually a virgin, the symbol for the city of Amsterdam.

Apart from the tall tales associated with the tower, there are many interesting facts about it as well. The Schreierstoren was once a port and, as such, also has bid adieu to many voyages that made history, including that by Henry Hudson setting sail for North America.
Image by Jola Sik on Wikimedia under Creative Commons License.