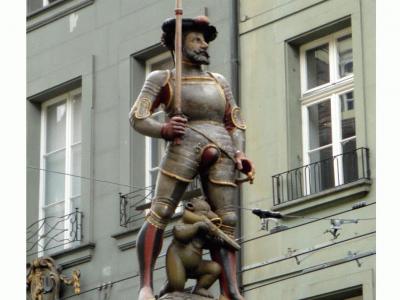 The Schützenbrunnen or Marksman Fountain was built between 1527-1543. Originally at the site was a wooden fountain and in 1527 it was replaced by a stone one. The statue in the fountain dates to 1543 and it shows an armed rifleman carrying the banner of the Society to Shooting in his right hand and a sword in his left hand. Between his legs a bear cub is holding a rifle. At fountain's original location the little bear's rifle aimed at the entrance of the former home of the Society to Shooting.