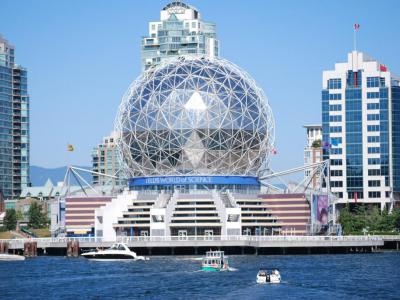 Science World at TELUS World of Science is a permanent setting for several different interactive science exhibits, run by a non-profit organization. The building itself is a geodesic dome of the type designed by R. Buckminster Fuller, the man for whom fullerenes (or “Buckyballs”) were named for. The building itself was named for Telus telecommunications, a company that secured naming rights to the dome with a $9 million donation.

TELUS World of Science was created when Vancouver was selected to host the 1986 World's Fair, serving as the expo center. Construction began in 1984 and finished in 1985. Once the expo was over in October, there was a lot of lobbying by the public to turn the former expo center into a museum, and new home of the former Arts, Sciences, and Technology Centre. Donations totaling over $19 million were collected from the public and private sector, and individual donors, and were used to redesign the iconic building's interior, create new exhibits, and add on to it. By 1999, the OMNIMAX Theatre was open to the public, and TELUS World of Science has been fully operational ever since.

Why You Should Visit:
Much for kids to do – from toddlers to older kids, but adults would enjoy this attraction, too.
All day in & out access with a stamp allows going for lunch at surrounding restaurants or having a picnic.

Tip:
You might want to bring a spare change of clothes for your kids as there is mild water play but they could still get wet.
Make sure to ask when the shows are as they have a small stage for a 30min show of different science experiments.
Needless to say, avoid weekends and holidays in order to enjoy this place with fewer people.