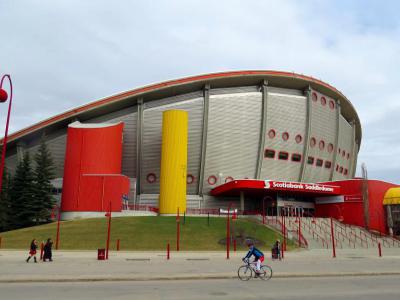 One of the most popular indoor arenas in Canada is located in Calgary. Known as the Scotiabank Saddledome, this arena can seat around 19,000 people. Built in 1983 in downtown Calgary’s east end, today this arena is a home of National Hockey League’s Calgary Flames. It was here that the 1988 Winter Olympic figure skating and ice hockey events took place.

This arena is used by the National Lacrosse League’s Calgary Roughnecks and the Western Hockey League’s Calgary Hitmen. Many conferences, concerts and sporting events and championships are held at this facility. All of them are organized by the Calgary Exhibition and Stampede.

The City of Calgary owns the Saddledome which is on lease to Saddledome Foundation. This non-profit foundation takes care of operations here. Lease agreement with Calgary Flames expires in 2014. Until then, they will be in-charge of running the stadium. If you're a sports fan, you should definitely include a visit to the impressive Scotiabank Saddledome in your Calgary tour itinerary.
Image by JamesTeterenko on Wikimedia under Creative Commons License.