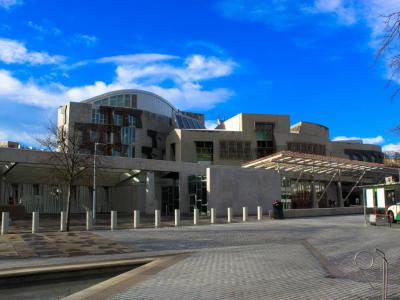 Home of the Scottish Parliament at Holyrood,The Scottish Parliament Building is part of the UNESCO World Heritage Site in central Edinburgh, and has been at the centre of controversy since opening – the choices of location, architect, design, and construction company were all criticised by politicians, the media and the Scottish public. Construction of the building commenced in June 1999 and it was scheduled to open in 2001. In fact, it did so more than three years later; the formal opening by Queen Elizabeth II took place on 9 October 2004.

The Parliament stands on 1.6 hectares in Holyrood Road at the foot of Arthur’s Seat. It consists of a campus of several buildings, designed by Euric Miralles, the Spanish architect, who died before the construction was completed.

Miralles’ idea was that the complex should achieve a poetic union between the Scottish landscape, its people, culture, and the city of Edinburgh, hence the many aspects linking it to the nature, such as the Garden Lobby’s leaf-shaped skylights, which are made of stainless steel with the glass covered by a lattice of oak struts. The huge windows in the Debating Chamber, Tower Building and Committee Rooms let in natural light and afford wonderful views of Holyrood Park, the Salisbury Crags and Arthur’s Seat. The walls and floors are made from Scottish rock and the furniture is oak and sycamore.

The Scots either love it or hate it, so do go along and visit it to see which side you are on. It is best to take the guided tour, because some of the rooms, closed to individual visitors, are open to tour guides. The gardens are open to the public and are full of wildflowers, shrubs and trees. There is a large pool with water features, green lawns, footpaths and bicycle paths.

Despite criticisms and a mixed public reaction, the Parliament Building was welcomed by architectural academics and critics. It won numerous awards including the 2005 Stirling Prize and has been described by landscape architect Charles Jencks as "a tour de force of arts and crafts and quality without parallel in the last 100 years of British architecture".
Image Courtesy of Flickr and Andy Hay.
Sight description based on Wikipedia.