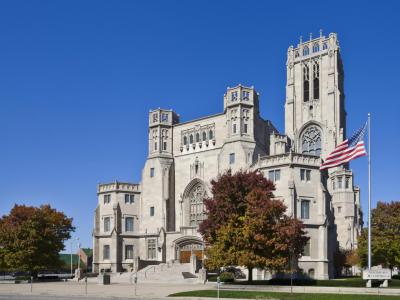 The Scottish Rite Cathedral was designed by architect George F. Schreiber and plays an essential role in Scottish Rite Freemasonry's life in Indianapolis. This Neo-Gothic building was constructed between 1927 and 1929. Some of the highlights include a 212-foot tower with a carillon known as the "Singing Tower".

Sculptures depicted on the exterior include key figures such as King Solomon and King Hiram. Marble floors at the eastern and southern entrances feature centerpieces with the 12 Zodiac signs. These windows depict important symbolism to Freemasonry, as well as symbolism representing 1920s technology, as well as the liberal arts and sciences.

A ballroom with a floating floor and Elizabethan architecture also has a chandelier with over 200 lights. There is a Cathedral Gothic theater that features over 50 hand-painted backdrops. In addition to taking advantage of tours of this magnificent building, visitors can also stop at the Double Eagle Cafe for lunch.
Image Courtesy of Wikimedia and Diego Delso.