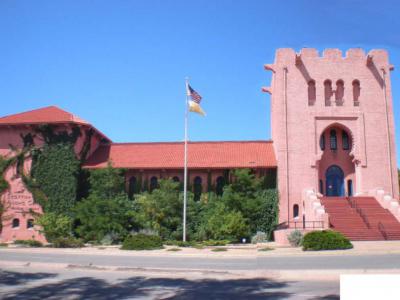 The structure was designed by the Los Angeles architectural firm of Hunt and Burns who were known for their designs in the California Spanish Mission Revival architecture style. But Hunt and Burns decided to go with a design that bridges the Spanish building tradition of New Mexico and that of the Moors in southern Spain.

The final product is a Moorish Revival style structure based loosely on one of the gatehouses to the Court of the Lions at the Alhambra in Spain. The building bears some obvious similarities with the Southwest Museum in Los Angeles, which was being designed by Hunt and Burns around the same time, including the tower but without the Islamic entry.

A special note about the building is that is was built before Santa Fe introduced strict building ordinances governing the architectural style of all buildings in Santa Fe, namely Pueblo Style, Territorial and Norther New Mexico. With its Moorish influenced architecture and pink color, the Scottish Rite Temple looks decidedly next to the other buildings on the block.

Maybe because its unique look, the building was chosen to serve as the filming location for the 2016 Tina Fey film Whiskey Tango Foxtrot.
Image by Carptrash under Creative Commons License.
Sight description based on wikipedia