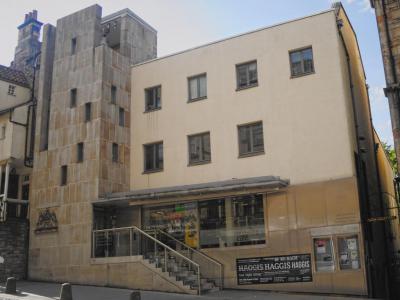 The Scottish Storytelling Centre is a vibrant arts centre that is dedicated to the fine art of telling stories, and is the world's first such purpose-built venue. Located on the High Street in Edinburgh's Royal Mile, it was formally opened on 1 June 2006 by Patricia Ferguson MSP, Minister for Culture in the Scottish Executive. Donald Smith, the first and current director of the Scottish Storytelling Centre, is himself a storyteller, playwright, novelist and performance poet.

The new building, designed by Malcolm Fraser Architects, replaced the former Netherbow Arts Centre, which itself replaced the Moray-Knox Church, demolished in the 1960s. It incorporates John Knox House.

It is also used as a venue during the Edinburgh Festival Fringe.

In 2017, the Centre was nominated for Best Performing Arts Venue in the Sunday Herald Culture Awards.