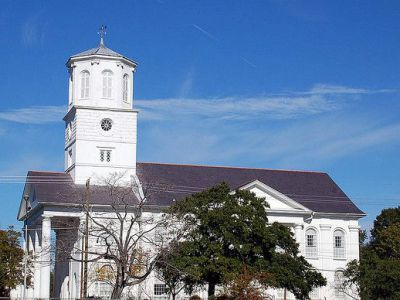 The church, built in the Jeffersonian style is the fourth oldest church structure in the city. It was built in 1809 by James and John Gordon. The brothers were both the builders and the architects. The church's steeple was not completed due to structural issues that developed in its tower. The church bell was given to the Confederacy in 1862 for use as cannon metal. Before the Civil War, the galleries were used by the church's more than 200 black members. The sanctuary was completely renovated after a fire in 1959. Situated on one of the highest points in the city, the church appeared on mariners' maps as "Flynn's Church," so called after the first pastor.

The Classic Revival sanctuary is stuccoed brick with two tiers of windows, a square tower with an octagonal belfry, and a tetra Tuscan portico. The size of the sanctuary presented a problem because it strained the voices of the ministers. Therefore, in 1833 the floor was raised three feet, the ceiling lowered sixteen feet, and the rear wall of the nave moved to enlarge the vestibule. In addition, side doors on the north and south were closed and pews were added. The pews used today were installed in 1849. Church pews were rented with the rental fee also purchasing a space in the cemetery plot. This custom ended in 1924, but the numbers on the pews remain.

The church has been restored numerous times since over the years, but it still keeps its charm.
Image Courtesy of Flickr and Fred Van Driessche.