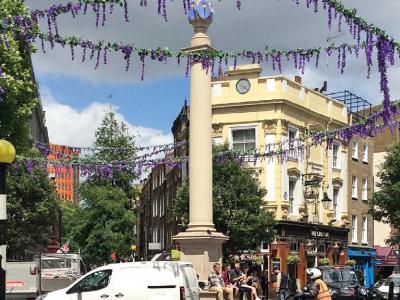 Lying between Covent Garden and Soho is the small cobbled-street area known as Seven Dials. It’s a great place for shopping without having to pay high London prices, and is also a small slice of the history of the capital.

The area is made up of seven streets and yards, which were once a part of the St Giles Rookery – a slum area frequented by the poor, criminals and prostitutes. However, when Thomas Neale laid out the designs in 1690, and gave his name to a street and a yard, he had visions of turning the area into an upper-middle class part of the city.

His original drawings centred on the central part of the area, a square where six streets would converge, and here he set up a pillar bearing six sundials. Shortly before the completion of the work, a seventh street was added, but although the name Seven Dials caught on, a 7th sundial was never added to the pillar.

In 1773 the Town Council removed the column, supposedly for repairs, but in truth to try to disperse the “unsavoury elements” that used the central place as a meeting point. This didn’t noticeably reduce the crime rate, but it gave the locals something to talk about.

Eventually, as often happens, the “unsavoury elements” lost interest in the place and moved on to more prosperous areas, where the pickings were easier, and gradually the Seven Dials became a popular meeting place for students.

Pubs and shops were either renovated or opened around the pillar, which was replaced by a copy of the original in 1988. Today the area attracts millions of tourists every year, with Monmouth Street’s shops selling luxury goods, Earlham Street that sells fine vintage and street-style clothes; Short’s Garden where you will find Neale’s Yard Dairy, with its 50 varieties of cheeses, and Neale’s Yard itself with its Herbal Remedy shop and several great pubs, restaurants with music provided by street musicians.
Image by stu smith on Flickr under Creative Commons License.
Sight description based on wikipedia