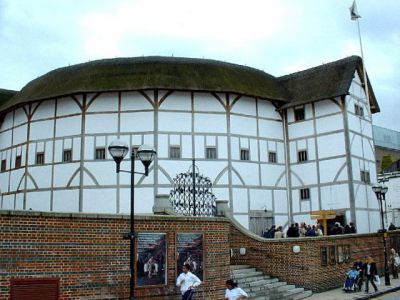 Shakespeare's Globe is a modern recreation of the original Globe Theatre. The original playhouse was built in 1599 and rebuilt in 1613 after a fire. But it was demolished in 1644, and all that remains of the building today are various academic references and evidence.

The recreation opened in 1997 with a showing of Henry V. It's regarded as a very realistic likeness, though it holds fewer people due to modern safety standards. The building is built about 230 meters (750 feet) from the site of the original. The original site was on the banks of the Thames, which is narrower than it was back then. To recreate the same atmosphere, builders decided to place the new theatre on the river bank. Plus, the original site has been built over and is covered by townhomes.

The recreation is the brain-child of American actor Sam Wanamaker, who moved to London in the 1970s and began working towards his vision. Wanamaker wanted the theatre to appear just as it did during Shakespeare's time there, so all research and designs were based on the earlier 1599 theatre building.

Shakespeare's Globe Theatre is an accurate reproduction of the original, and there's no better way to connect with the Bard than to travel back in time and view a performance. While time travel is still a mystery, the Globe comes pretty close.

The original Globe was owned by the actors who made up the Lord Chamberlain's Men, of which Shakespeare was the primary writer. He began with a 1/8th share that diminished over the theatre's lifespan as more shareholders entered the picture. It's believed that the theatre opened in September of 1599 with a production of Julius Caesar.

At the recreation, things are kept as authentic as possible. Performances are kept as true-to-form as possible, with no microphones, nor any spotlights or other modern theatre technologies.

If you can't make one of the summer plays, you can take the Globe Theatre Guided Tour anytime. This behind-the-scenes look at the original theatre and the recreation of the building.

The property includes the neighboring Sam Wanamaker Playhouse, a recreated Jacobean-era theatre. It's used during the winter when the open-air Globe cannot.

The location of the original Globe is marked with informational signs and a commemorative plaque. Viewable portions of the original foundation are also laid out in pavers. It is located on the east side of Southwark Bridge Road, just south of Park Street.