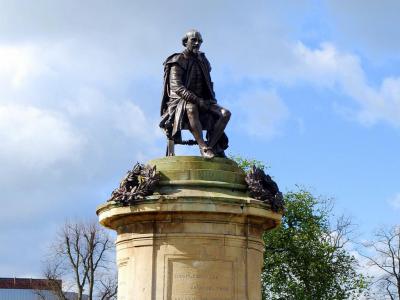 In 1877 a committee was created in Stratford-upon-Avon to erect a memorial to Shakespeare. This originally comprised a theatre building, to be sited on land donated by the bank of the Avon within sight of the church where Shakespeare was buried.

A statue was also created in 1888, the work of Lord Ronald Gower. This is situated in Stratford's Bancroft Gardens. The monument shows Shakespeare seated on a pedestal, surrounded, at ground level, by statues of Hamlet, Lady Macbeth, Prince Hal, and Falstaff. These characters were intended to be emblematic of Shakespeare's creative versatility: representing Philosophy, Tragedy, History, and Comedy.

Another statue is present in a niche on the exterior of the town hall building.

This sight is featured in a self-guided walking tour of Stratford-upon-Avon, England within the mobile app "GPSmyCity: Walks in 1K+ Cities" which can be downloaded from iTunes App Store or Google Play. Please download the app to your mobile phone or tablet for travel directions for visiting this sight. The app turns your mobile device to a personal tour guide and it works offline, so no data plan is needed when traveling abroad.