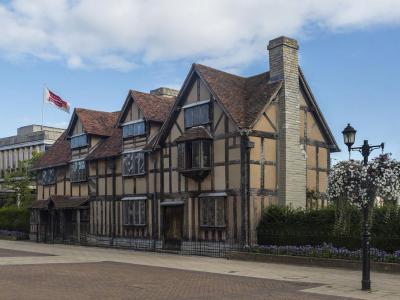 "A Mecca for all lovers of literature." That must be true, judging by all the "lovers of literature" signatures etched into the windows of the house on Henley Street. Years after William Shakespeare left the planet, his admirers came to say hello.

Charles Dickens, Sir Walter Scott, Thomas Carlyle, Lord Byron, Lord Tennyson, John Keats and last but not least, William Thackeray left their names. Here lived the Master of the English Language. What was it like, the house he grew up in? Was it rich, poor, middle class?

It is a very simple house today, but in Shakespeare's time it would have been thought a large dwelling. People were shorter, doors were lower, rooms were smaller. The house was effectively divided in two parts. One was for business and the other for living. Shakespeare's father, John, was a glove maker and a dealer in leather and wool.

It is a restored 16th century half-timbered house in Stratford-upon-Avon, Warwickshire, England. It is a museum now, but in 1564 it was where William Shakespeare was born. The house was constructed of wattle and daub around a timber frame. The fireplaces are of brick and stone and the ground floor is of flagstone.

William Shakespeare inherited the house but by then he had moved with his family to New Place on Chapel Street. Eventually the Henley Street house passed to other owners and by the 1800s it had fallen into a distressed state. In 1846 it was put up for sale. P.T. Barnum of circus fame tried to buy it and ship it "brick by brick" to the USA.

Why you should visit
William Shakespeare is the heart of this town.

Tips
Don't worry about driving, parking, etc. There is a tram (good one) and most places to be seen are within walking distance of each other.