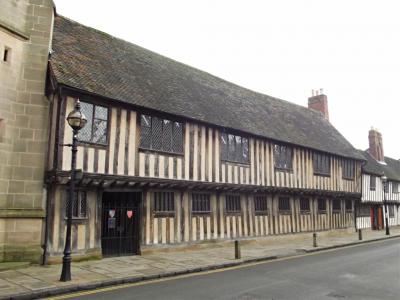 Here is an interactive peek into William Shakespeare's childhood and schooling in the 16th century. The Guild of the Holy Cross built the Guildhall in 1420. Over the years more buildings were added, including a schoolhouse, a Chapel and Almshouses. The Guildhall was the headquarter of the Stratford Borough Council from 1553 and 1848.

When the Borough Council left for new digs at the Town Hall, they left the building to the school. The school, known as The King's New school, had been in the Guildhall since 1568. It later became the King Edward VI School (K.E.S.). Three years later seven-year-old William Shakespeare attended his first class. One may assume it was writing.

The school has been in continuous use by the local people since it first opened. The Guildhall has always been used and looked after and never neglected. Not only local students may study here, the school is also open to tourists. They may take an interactive class with William Shakespeare's teacher, Master Thomas Jenkins.

Adjoining the Guildhall is the Armoury. It was originally used a store place for arms, but after 1553 it became an administration center for the school. It also served as courtroom. On the first floor is the Master's chamber. In the center of the chamber is the prefect's table, bearing the names and initials of schoolboys through the years.

Students were mostly the children of wealthy middle class people. Williams' father, for instance, was the bailiff for the town. It was a public school and an entrance exam was required. Students did not pay fees, but they did have to provide their own firewood and candles. Classes frequently went from 6 am to 6 pm. There was a brief midday break.

Why you should visit
to experience a bit how education used to be.

Tips
When using the feather quill, be wary of ink blots.
Image by Elliott Brown on Wikimedia under Creative Commons License.