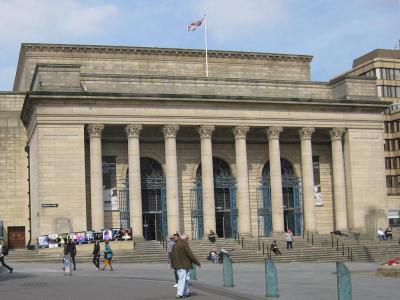 Sheffield City Hall is a Grade II* listed building in Sheffield, England, containing several venues, ranging from the Oval Concert Hall which seats over 2,000 people to a ballroom featuring a sprung dance floor. It is currently operated by Sheffield International Venues. The building was designed in 1920 by E. Vincent Harris, but was not completed until 1932. It is a neo-classical building with a giant portico. The Oval Hall is the largest hall in the building, seating 2,271 people and is commanded by an angel's chorus. This provides both natural light to the main hall and can also be used by a hidden choir whose voices are carried through the building and down onto the audience. The Oval Hall is complemented by the more intimate 500-seater Memorial Hall and the Ballroom which can host anything from after show parties to club nights and afternoon tea-dances. In 2005, the City Hall and its surroundings were refurbished and re-developed at a cost of £12.5 million.
Image by Warofdreams on Wikimedia under Creative Commons License.
Sight description based on wikipedia