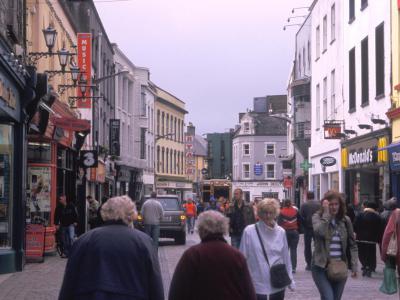 Shop Street, is the main shopping street of the town. It is partly pedestrianized and centered on retail business. There are brightly colored storefronts, pubs and well preserved brick buildings. Lynch's famous 16th century Castle is on Shop Street. It has been a branch bank of Allied Irish Banks since the 1960s.

The street is crowded with shoppers, dancers, musicians, tourists and performers. The music is mostly for dancing, reels and such. There are shops of every kind. The bright, colorful buildings are usually no more than four stories tall. Shop Street is actually part of an area. It is short itself, running from Lynch's Castle to Quay Street.

The area has a bohemian atmosphere. There are old family retailers, chain stores, places to get one's face painted, human statues are not hard to find. It is called the San Francisco of Ireland. The northern retail-intense stretch is commonly called Shop Street. The more southerly part (called Quay Street) is the entertainment stretch.
Image Courtesy of Wikimedia and Jerzy Strzelecki.