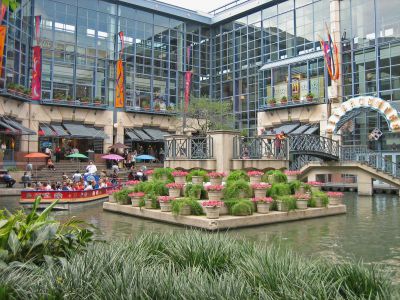 Shops at Rivercenter (formerly known as Rivercenter Mall) is a shopping mall situated along the River Walk in downtown San Antonio. A true centerpiece of the River Walk, this is a dining, shopping and entertainment mecca with scores of San Antonio specialty and gift shops or stores that are Texas specific, anchored by the likes of Macy's, H&M, as well as a 38-story, 1,001-room Marriott hotel.

The landmark 1871 St. Joseph's Catholic Church, that had stood on this site originally, refused to sell to the first developers, Joske's Department Store, in 1945, and so the store had to be built around it. The Shops at Rivercenter opened in 1988 as Rivercenter Mall, with San Antonio's first Lord & Taylor department store, an IMAX theater, as well as Dillard's (closed August 2008). Part of the downtown redevelopment included an extension of San Antonio's famed River Walk into the Rivercenter lagoon.

The structure that houses Dillard's, an AMC Theatres, as well as other shops, originally opened in 1887 as a freestanding Joske's at the corner of Alamo and Commerce streets. Several expansions from 1909 to 1953 brought the space to 551,000 square feet (51,200 m2). Joske's closed its flagship store for remodeling in 1987, planning to reopen it in 1988, to coincide with the Rivercenter opening.

In October 2006, plans were revealed to redevelop the property over a number of years. Five-star restaurants and more outdoor seating were to be added in the first phase of that redevelopment. San Antonio's Historic and Design Review Commission approved the redevelopment plan on October 4, 2006 with a grand re-opening planned for 2008.

In 2016, the old Joske's building was added as a new modern wing of the mall with notable tenants, such as Dave & Buster's, H&M, Starbucks, and Johnny Rockets, upon which, that same year, the mall was renamed Shops at Rivercenter. Presently, the place contains four floors. One of its coolest features is the food court at the bottom level, which is also the level the San Antonio River that just happens to run through. Overall, Rivercenter Mall is perfect for a specialty shopping hunt and River Walk relaxation, much as it is ideal for those who want to take a bit of San Antonio home with them.
Image Courtesy of Flickr and slideshow bob.
Sight description based on Wikipedia.