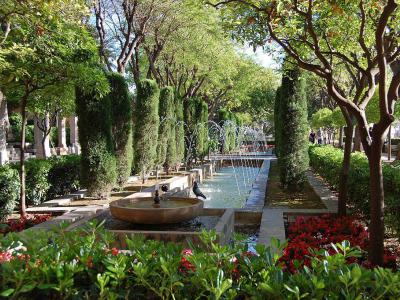 Within the Almudaina Palace in the 14th century were the Royal Gardens. The gardens were laid out in the Andalusian style with fruit trees, vegetables, medicinal herbs, ornamentals and flowers. Until 1847 the garden was closed in by walls, the seashore and the gardener's house.

From 1847 to 1918 the area of the garden was redeveloped. Buildings were erected on the end of the Royal Gardens. The Alhombra Hotel, the lyric Theatre and small shops, newspaper offices and a shipping office stood in place of much of the garden. In 1966 architect Gabriel Alomar i Esteve executed his plan to revitalize the city of Palma.

The plan was to demolish the buildings that had taken over the garden plots and reinstall the royal gardens. In remodeling the royal gardens, Gabriel was strongly influenced by traditional Andalusian styles. In the garden today are cypresses, fountains, orange trees, shady arcades and a large pond with black swans.

There is an original Islamic arch over the pond. There are also several sculptures. The most famous is a bronze figure called the "Stone Slinger." The sculptures are the works of Llorenc Rosello and Josep Maria Subirachs and Alexander Calder.
Image Courtesy of Wikimedia and Sigismund von Dobschütz.