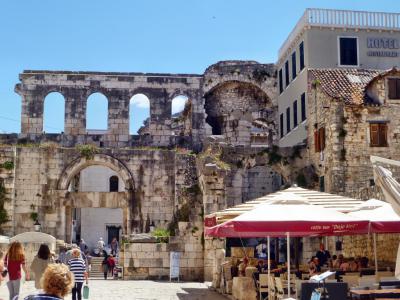 There are four gates to the stari grad ("old town"). The Silver Gate faces east, in the direction of the Roman town, Epetia. Since the gate was meant to face east, the Romans called it Porta Orientalis, the "eastern gate." The other three gates to Diocletian's retirement retreat are called, "Golden Gate", "Iron Gate", and "Bronze Gate."

Around the sixth century, above the gate in a narrow corridor a mini-church of St. Apolinar was built. This occurred at the time of a flood of refugees from outside the walls. Similar mini-churches were established above the other gates. In the 18th century the ruling Venetians opened a "small gate" next to the Silver Gate.

Opposite the Silver Gate by a market is the monastery and church of St. Catherine of Alexandria built by the Dominicans in the 17th century.

On his way to visit the Cathedral of Saint Dmnius in 2000, Pope John Paul II drove through the Silver Gate in his Popemobile.
Image Courtesy of Wikimedia and JoJan.