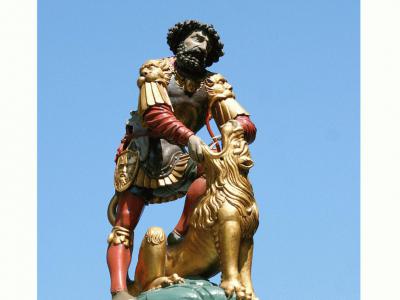 The Simsonbrunnen or Samson fountain is a fountain built in 1544 and is modeled after a fountain with the same name in the town of Solothurn in the northwest of Switzerland.

The fountain tells the Biblical story of Samson killing a lion. According to the story, Samson was born to a sterile Israelite couple on the conditions that he and his mother abstain from all alcohol and that he never shave or cut his hair. Because of his commitment to live under these conditions, Samson was granted great strength.

As a young man, he fell in love with a Philistine woman and decided to marry her. At this time, the Philistines ruled over the Israelites and Samson's decision to marry a Philistine woman caused great concern among his family. He calmed their concerns and traveled to marry his love. On the way he was attacked by a lion, but with his incredible strength he killed the lion.

Later, he saw that bees had built a honeycomb inside the lion's body. He used this event as the basis of a riddle, which when not answered, gave him a pretext to attack the Philistines and lead an unsuccessful rebellion.
Image Courtesy of Wikimedia and Mike Lehmann.
Sight description based on Wikipedia.