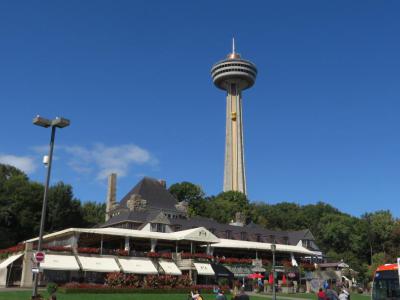 The Skylon Tower is seen in Superman II. It is also used as a police lookout in the 1979 film Search and Destroy starring Perry King and George Kennedy.
Image by mrkathika on Flickr under Creative Commons License.
Sight description based on wikipedia

Want to visit this sight? Check out these Self-Guided Walking Tours in Niagara Falls. Alternatively, you can download the mobile app "GPSmyCity: Walks in 1K+ Cities" from iTunes App Store or Google Play. The app turns your mobile device to a personal tour guide and it works offline, so no data plan is needed when traveling abroad.

It is only natural that whoever visits Niagara Falls is eager to get the best possible view of the Falls itself. Luckily, there are quite a few spots in the city - such as Skylon Tower, Embassy Suite Hotel Tower, Konica Minolta Tower and Niagara Sky Wheel - offering exactly that. However, if the landmark waterfalls isn't just the only thing you want to observe in Niagara Falls, follow this...  view more