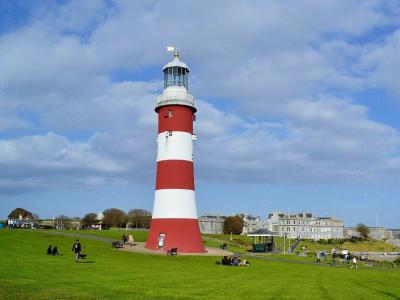 Smeaton's Tower is the third and most notable Eddystone Lighthouse. It marked a major step forward in the design of lighthouses. In use until 1877, it was largely dismantled and rebuilt on Plymouth Hoe, where it now stands as a memorial to its designer, John Smeaton, the celebrated civil engineer. Smeaton was recommended to the task by the Royal Society and he modelled the shape of his lighthouse on that of an oak tree, using granite blocks. He pioneered the use of "hydraulic lime," a form of concrete that will set under water, and developed a technique of securing the granite blocks together using dovetail joints and marble dowels.

Construction started in 1756 at a site in Millbay where Smeaton built a jetty and workyard in the south west corner of the harbour for unloading and working the stone. The work was completed in August 1759, at a cost of £40,000. Many of the men employed in the construction were Cornish tin miners, and to avoid the possibility of press ganging, which was rife at the time, Trinity House arranged with the Admiralty in Plymouth that each man was issued with a medal to confirm that they were working on the lighthouse. Smeaton's tower has been a Grade I listed building since 1954. It is open for visitors who may climb the 93 steps, including steep ladders, to the lantern room and see the views of Plymouth Sound and the city.
Image Courtesy of Flickr and Robert Pittman.
Sight description based on Wikipedia.