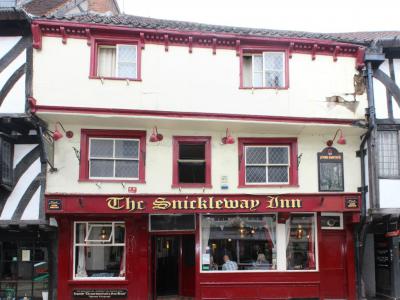 The Snickleway Inn is a traditional pub and the only 15th-century galleried inn in York. The historic building has served many different purposes over its lifetime. During the siege of York in 1644 it was used as the Royalist magazine, and then later as a brothel.

It has also changed several names over the centuries, from The House of Tudor to The Anglers Arms to finally The Snickleway Inn in 1994. The latter name derives from the term coined by Mark W. Jones in a 1983 book “A Walk Around the Snickelways of York”, with Snickelway being an amalgamation of Snicket (a North Yorkshire word for an Alley) and Alleyway.

Despite numerous renovations, the building has retained many of its original features. The beams and woodwork are in immaculate condition. The interior is rich in breweriana, beautiful dark wood panelling, and open brick. There are cosy little nooks with a few open fires and a quaint room leading out to a little walled yard area with some alfresco seating.

The Snickleway Inn is also reputed to be one of York’s most haunted locations. Reportedly it has at least five active spirits on the premises. Among them are: the ghost of a young girl; an old gentleman; a man in Elizabethan-era clothing; Marmaduke Buckle – an 18th-century person who hanged himself from the beam upstairs; and the rarely seen spirit whose presence is identified by the strong smell of lavender which was applied for stifling the stench of rotten corpses during the great plague.

But the scariest of them all is the malevolent spirit that causes havoc in the cellar. Described by mediums as a “creature of great age and intelligence, surrounded by utter evil”, it turns off gas taps and throws things at the staff. Spooky!!!
Image Courtesy of Wikimedia and Chabe01.