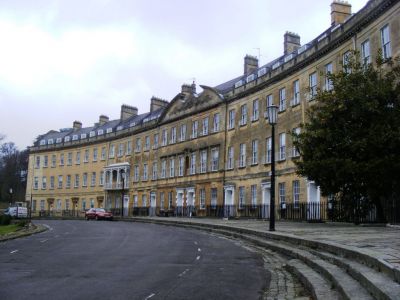 Somerset Place is one of many fine examples of Georgian architecture within the city of Bath. Less renowned than the nearby Royal Crescent, the crescent remains a jewel in the city’s impressive collection of Georgian streets and buildings. Somerset Place, collectively regarded as a Grade I listed building, is situated close to Bath Spa University, among the hills that lie to the north of the city centre. It is accessible from central Bath via a No. 2 bus, or a brisk uphill walk out of the city centre along Broad Street and Lansdown Road, following directions to the university campus.

Somerset Place is a sweeping crescent of adjoining Georgian town houses, designed by renowned architect John Eveleigh. Building work on Somerset Place began in 1790 but following Eveleigh’s bankruptcy was not completed until 1820. The buildings still maintain their original Georgian façade to this day, despite damage inflicted by German bombs during the Second World War. Today the buildings are largely used as student accommodation for the nearby university, and make a worthwhile addition to any walking tour of the elegant streets and crescents north of the city centre. Previously a part of the university campus, they are now privately owned.
Image Courtesy of Wikimedia and Rodw.