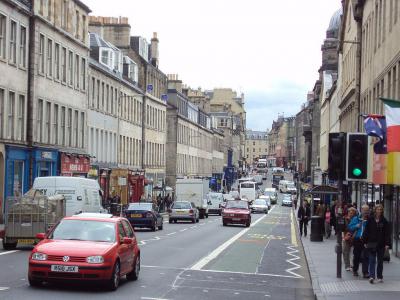 South Bridge is a road bridge in Edinburgh, Scotland, starting at the High Street and finishing at Chambers Street/Infirmary Street.

The bridge was completed in 1788. It is constructed of nineteen arches, but is almost entirely enclosed by buildings on both sides, exposing only the largest arch where the street crosses the Cowgate. Below deck level are many buildings and vaults, the latter are now something of a tourist attraction.

Houses, offices and shops were built along each side of the bridge and tenement houses, taverns and workshops were built into the vaults underneath it. These were damp, miserable places which quickly degraded until they were only inhabited by the poor seeking refuge. They were eventually closed for health and safety reasons.

In 1985 the vaults were partially reopened as part of the city’s “Ghost Tours”. On Thursday, Friday and Saturday night is August you can join the “Vault Vigils” and spend the night in one of the vaults. Ghost-hunting equipment is set up so that “vigils” can record any supernatural movement.

This is only recommended for the brave – not because of any lingering spirits, but because the vaults are dank and cold even in the hottest summers. The vaults have been classed as one of the most haunted areas in the United Kingdom.
Image Courtesy of Rept0n1x.