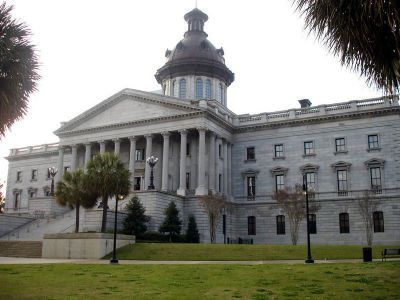 The State House is in the Greek Revival style; it is approximately 180 feet (55 m) tall, 300 feet (91 m) long, 100 feet (30 m) wide. It has 130,673 square feet (12,140 m2) of space. The South Carolina State House was designed first by architect P. H. Hammarskold. Construction began in 1851, but the original architect was dismissed for fraud and dereliction of duty. Soon thereafter, the structure was largely dismantled because of defective materials and workmanship. John Niernsee redesigned the structure and work began on it in 1855, slowed during the Civil War, and was suspended in 1865 as Sherman's Union Army entered Columbia on February 17. Although several public buildings were "put to the torch" when United States troops entered the city, the capitol building was not.
Image Courtesy of Wikimedia and Badbadb.
Sight description based on Wikipedia.