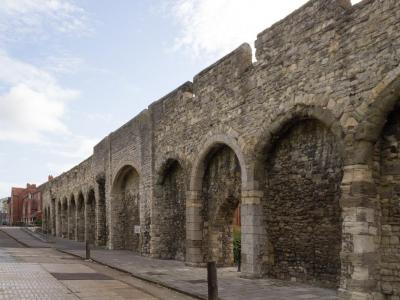 Southampton has had some defensive structures since occupied by the Romans. French forces attacked Southampton in 1338. However, the defenses were not adequate.

Work on the new wall began in the 1360s. Eventually, the wall was 1.25 miles long and wholly enclosed Southampton. The impressive wall housed 29 towers and eight gates. The towers were built to house cannons, which was a new technology in the 1300s.

The walls were used for defense throughout the 15th century. By the 18th century, the walls and gatehouses fell into disrepair. More recently, efforts have been made to preserve these historic walls.

Arundel tower still stands and is a popular attraction. The west walls are home to a unique feature called The Arcades. They are a series of arches built in the 14th century to reinforce the original 12th and 13th-century walls.
Image Courtesy of Flickr and Richard Nevell.