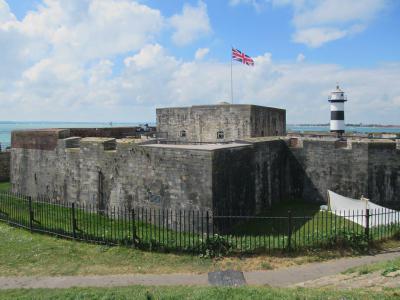 Southsea Castle (early in its history also known as Chaderton castle ) is one of Henry VIII's Device Forts, also known as Henrician Castles, built in 1544 on the waterfront at the southern end of Portsea Island (an area that later became named Southsea after the castle). The castle was built to guard the eastern entrance to the Solent and entrance to Portsmouth Harbour. Henry VIII watched the Mary Rose sink from near this location.

The Castle was initially constructed in 1544 however there is the possibility that work started the year before. The work was in part paid for by money received as part of the Dissolution of the Monasteries. The castle was constructed around a square keep. In 1960 Portsmouth city council took control of the castle and in 1967 it was opened as a museum. By 1975 the castle was able to attract 99,704 visitors over the course of a year.

Currently the castle is operated as a tourist attraction by Portsmouth City Council. In the summer visitors can explore the castle and ramparts for an entrance fee. The castle can also be hired as a venue for weddings and parties. The area next to the castle, known as Castle Field forms a natural amphitheater and is used for various public events including fairs, music concerts and festivals. Among other exhibits the castle houses a collection of cannon.
Image Courtesy of Flickr and Ronald Saunders.
Sight description based on Wikipedia.