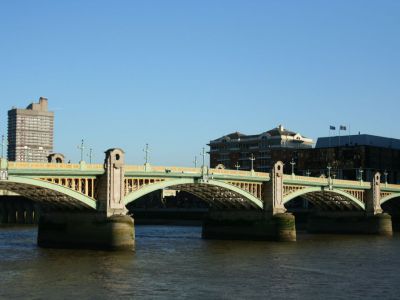 Southwark Bridge is an arch bridge for traffic linking Southwark and the City across the River Thames. It was opened in 1921. There was an earlier bridge on the same site opened in 1819, and it was originally known as Queen Street Bridge, as shown on the 1818 John Snow Map of London. The bridge was notable for having the longest cast iron span, 73 m, ever made.

The bridge provides access to Upper Thames Street on the north bank and, due to the Ring of steel, there is no further access to the City and the north. This has led to a reputation of it being the least used bridge in central London and it is sometimes known as the "car park bridge" as coach drivers use it to park their vehicles.
Image by Steve F-E-Cameron on Wikimedia under Creative Commons License.
Sight description based on wikipedia