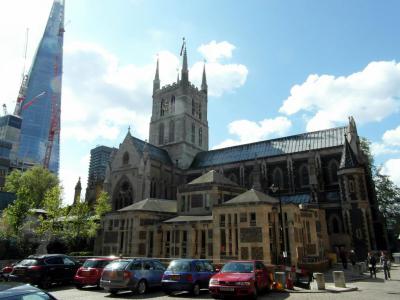 As it stands today, the cathedral was built between 1220 and 1420. In Shakespeare's time, this was a parish church known as St. Mary Overie. It served the Bankside area in the late 1500s, and so Shakespeare and many of the Elizabethan dramatists would have worshipped and passed through here.

Edmund, Shakespeare's brother, was buried here in 1607 in an unmarked grave. A stone was later placed in the choir area. There is also a stained glass dedicated to Shakespeare's plays, along with a statue of the Bard himself, writing quill in hand.

The site began between 1106 and 1538 as a church of an Augustinian priory. When the monasteries in England were dissolved, it became the St. Saviour's parish church. In 1905, it became a cathedral when the diocese of Southwark was created.

The building was heavily damaged in the London blitz in 1941. It's estimated that Germany dropped more than 1,600 explosive bombs on Southwark throughout the war. You can see shrapnel damage on the exterior of the cathedral to this day.
Image by Reading Tom on Flickr under Creative Commons License.