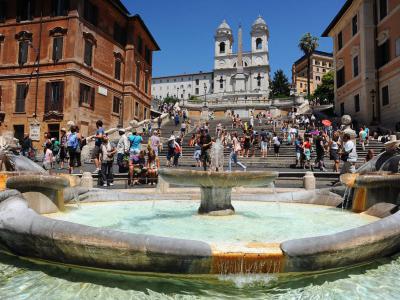 The famous Spanish Steps is one of Rome's iconic destinations and a favorite meeting point. The steps got their name from the Spanish Embassy that once stood nearby, in Piazza di Spagna. Built around 300 years ago, this is the longest and widest staircase in Europe leading up to a beautiful 16th-century church, called Trinità dei Monti (Trinity of the Mountains).

Nowadays filled with tourists from all over the world, from as early as the 18th century it has been a popular spot with artists, poets, and later Hollywood filmmakers. The latter, in turn, attracted to the steps many beautiful women seeking to become models, as well as rich Romans, international travelers and people from all the other walks of life. The tradition of meeting at the Spanish Steps is now firmly embedded in the Romans as well as the guests of the Italian capital.

Sitting at the foot of the steps, to the right, is the house-museum of John Keats, the famed English poet of Romanticism, who used to live here. Also nearby is Babington's tea room, a place that has survived two world wars and numerous hardships prior to becoming a staple tourist attraction.

***Movie "ROMAN HOLIDAY": Joe Meets Ann Again***
Fresh after haircut, Princess Ann sits on the steps, enjoying the view, eating gelato. After taking compliments for her new look, she confesses to Joe Bradley that she had run away from school and takes his proposal to spend the day together before she returns. And here the holiday begins!

Why You Should Visit:
If you like places with a great deal of history and photogenic appeal, the Spanish Steps is definitely the one.
In terms of tourist activities, you can enjoy carriages, as well as many shops and bars.
And the main drag here is the picturesque views of Rome opening from the very top of the staircase, particularly at sunset. A truly unbeatable sight!

Tip:
Best time to visit it is in the afternoon and later – also because of the heat.
Image Courtesy of Wikimedia and Mstyslav Chernov.