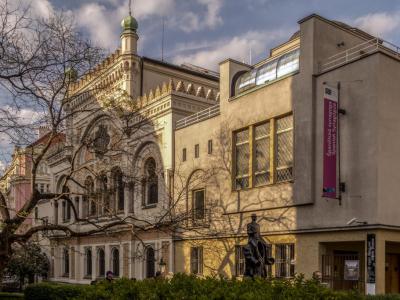 Prague can proudly boast some of the most beautifully decorated buildings in Europe and the Spanish Synagogue, even by Prague’s standards, is quite simply breathtaking.

Located in the Jewish Quarter, this Moorish Revival synagogue was built in 1868 according to the design by Vojtech Ingnatz Ullman, and stands on the site of the oldest synagogue in the city. If you are a seasoned traveler, you might find this building somewhat familiar. This is because it is a close copy of the Leopoldstadter Tempel in Vienna; its tripartite façade and central section, with its twin-domed turrets, are taller than the two flanking ones.

Still, it is the interior of the building that takes one's breath away, really. Each surface, other than the floor, is covered in Islamic-style arabesques that are carved in wood, molded or painted. The overall effect is quite stunning. Of a particular note is the ark and bimah, the dome over the central space with its Magen David chandelier and the beautiful organ.

Under the Nazis and then the Communists the synagogue fell into disrepair and remained closed for over 20 years. Presently owned by the Jewish Museum, the property has been restored and reopened in 1998 as a concert hall and museum. Its name represents a bit of a mystery as it has never been used by a Spanish congregation.

Why You Should Visit:
The most beautiful and unusual synagogue in Prague's Jewish Town.

Tip:
Recommended visiting as part of the Jewish Quarter tour.
Bakeshop is close-by for a sandwich or a sweet treat.