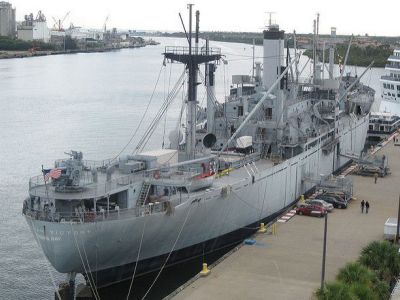 One of only four operational World War II ships in the country, the SS American Victory is a preserved merchant marine ship that transported supplies and troops to the front lines during the war. The Victory-class ships were designed to be quickly built, but faster and more capable than the more common Liberty ships. The ship is 455 feet long, weighs more than 10,000 tons, and was built in an impressive 55 days.

The ship was launched in Los Angeles in 1945 and immediately began an around-the-world tour. At war's end, she ferried cargo and troops home. She's powered by two Allis Chalmers marine steam turbines making 6,000 horsepower each, which you can see during your tour of the engine room. She can carry a half a million cubic feet of cargo and was armed with ten machine guns.

Today the ship has been restored to fully functional status. Guided and self-guided tours are available through the many compartments and rooms. Many display photos and memorabilia from the time and show what life was like for a merchant marine during WWII. The ship also occasionally sails for Living History Day Cruises. The ship and museum serve as a testament and memorial to all veterans, especially the merchant marines. In the words of the museum, the merchant marines were the "unsung heroes of numerous conflicts…with the highest percentage rate of casualties of any service."