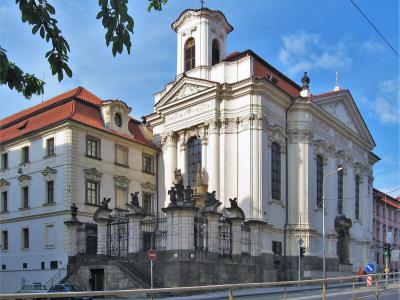 The Saints Cyril and Methodus Cathedral is the first Orthodox temple in Prague and is well worth a visit as such, which has also played an important role in Prague’s history.

In 1739 a Baroque church was built on its site, along with a house for retired priests, consecrated to St Charles Borromeus, the 16th-century Archbishop of Milan. In 1783, the church and the retirement house were closed down and converted to army storehouses and, later, barracks. In 1869, it became the Czech Technology Centre.

Eventually, it was given to the Orthodox Church who sought an unused building to establish a cathedral. The latter was consecrated to St Cyril and St Methodus in 1935. To this day the cathedral retains its original Baroque frescoes and stucco-work.

During the Second World War, seven Allied paratroopers hid in the cathedral crypt after assassinating the Nazi Governor of Bohemia and Moravia, Reinhard Heydrich. They were betrayed and four of them trapped in the crypt by the Gestapo. When the Gestapo tried to flush them out by flooding the crypt, the four men committed suicide. The cathedral clergymen and several laypeople were arrested for collaboration and executed. The Nazi desecrated the cathedral and in 1942, closed all the Orthodox churches in Czechoslovakia.

The cathedral was re-consecrated in 1947 and a plaque on the wall bears the names and portraits of the heroes who died here. Today, the crypt is the National Memorial to the Victims of the Heydrich Terror and can be visited by appointment.

Why You Should Visit:
A must-see for anyone with an interest in WWII history and/or (Orthodox Christian) religious sites.
Caters well for the English-speaking travelers.

Tip:
Plan to spend 1 1/2 hours exploring the place and reading all of the information.
You should arrive at 4pm latest, as it closes promptly at 5pm.
Admission is free or by donation.